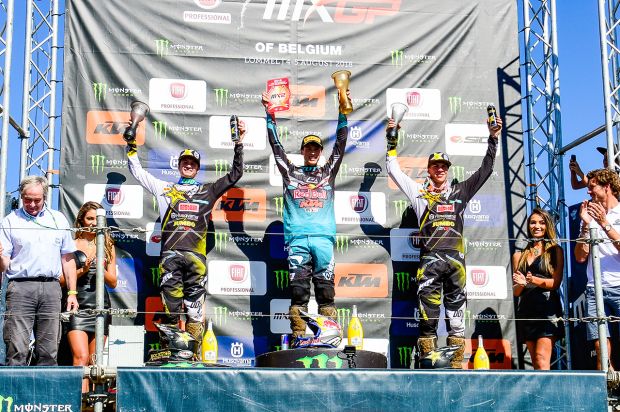 Europe is being confirmed as the land of opportunity for Jorge Prado, who triumphed in the Belgium after the rounds won in Italy, France, Portugal, Latvia, Germany and the Czech Republic. With the latest success he is now leading the MX2 championship scoreboard engaging in an exciting head-to-head fight with Latvian Jonass.
Jorge Prado has very young age, precocious skills and authentic values, such as dedication, determination and dynamism, on his side. These shared ideals are the foundations of the partnership with Fiat Professional, which has picked him to consolidate its presence in the MXGP championship. The brand is already Official Sponsor of the event and by the side of defending world champion Tony Cairoli.

The Spanish rider is a true promise and is born to be a pro. He shattered all the records of forwardness in motocross year-after-year and right now, at just seventeen, he is already the man to beat in the MX2 World Championship and is competing directly for the title. He will be accompanied on his all-but-easy way to success by Fiat Professional, Personal Sponsor of the rider with Fullback Cross, the pick-up truck of the Fiat Professional line-up, and Ducato 4×4, the all-wheel-drive, all-terrain vehicle that expands the possibilities of use of Ducato for work and leisure alike.

He put on a great show yesterday on the 1880 metres of the track, characterised by sandy terrain. The Belgian track is known to be tough. Being able to tackle all types of terrain is another feature that Jorge Prado shares with Fullback Cross and Ducato 4×4, which are tough vehicles equipped to deliver the best performance in any condition, even on rough terrain at full load.