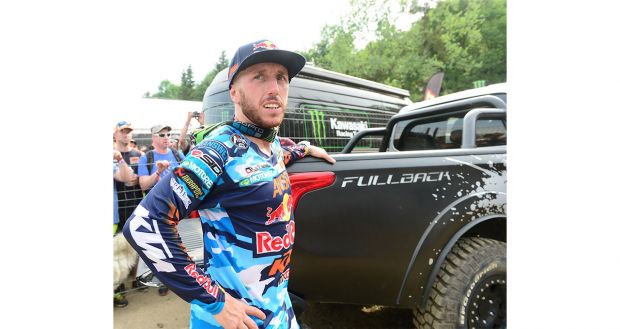 For the third consecutive year, the FCA Group commercial vehicle brand is Official Sponsor of the FIM MXGP Motocross World Championship, now in Europe after kicking off in Argentina. Defending champion Tony Cairoli is brand ambassador – the nine-times world champion epitomises the ambition of a fast-evolving brand

The FIM MXGP Motocross World Championship is landing in Europe. After the inaugural event in Patagonia, the riders will be heading to the track in Valkenswaard, Holland, which will host the first appointment on the old continent on Sunday, March 18. The defending champion is Tony Cairoli who, after having come first in race 1 and second in race 2 in Patagonia, can already boast 47 points on the scoreboard, sharing the leading position with his competitor. Tony Cairoli is Fiat Professional brand ambassador and Fiat Professional will be the Official Sponsor of the championship for the third year. By the side of the world champion is Fullback Cross, the pick-up truck of the Fiat Professional range, and Ducato 4×4, the all-terrain vehicle which expands the possibilities of use of Ducato for work and for leisure.

Not by chance, Fullback Cross and Ducato 4×4 are the “product heroes” of the FIM MXGP Motocross World Championship official fleet. The vehicles are perfect for work and for leisure. Fullback Cross is rugged, reliable and with impressive load capacity. It boasts a payload of more than a tonne and over three tonnes of towable weight. Furthermore, by implementing all-wheel drive and a 4WD electronic selector, it can easily tackle the roughest terrain in the toughest conditions, like when travelling off-road carrying a heavy load. Ducato 4×4 is an all-terrain, permanent four-wheel drive vehicle with two transfer cases and an automatically operated central viscous coupling. This device ensures the right drive torque split between the front and rear wheels, optimising traction on mud, snow and sand. Ducato 4×4 also offers all the features of solidity and performance needed to tackle off-road trails with particular outfits which exploit its entire payload.

Fullback Cross and Ducato will be on show, together with the other vehicles of the range, on the Fiat Professional stand set up in the paddock area at all MXGP championship races.

The partnership between Fiat Professional and the FIM MXGP Motocross World Championship is based on authentic shared values of enthusiasm, determination and constant commitment, all embodied by Tony Cairoli, who is bringing all his usual tenacity and courage to this season’s world championships, reflecting all the love of a challenge central to the Fiat Professional mentality. After a very successful 2017, Fiat Professional is preparing for an exciting 2018, packed with innovations and new developments which will complement the range even further and flank the motocross scene and the various stages of the world championship.

Fiat Professional has created a special offer for all MXGP championship enthusiasts. Spectators to any one of the European stages of the championship will be offered five total years of warranty if they purchase a new commercial vehicle from the range.